The China-Pakistan Economic Corridor project is the bridge of regional interconnection designed to benefit not just the host countries but also the neighboring ones of Iran, Afghanistan, India, and Central Asia, along with being a profitable journey towards economic regionalization.

The importance of CPEC lies in the improvement of bilateral ties as well as ambitious planning and investment in a number of sectors, from health, agriculture, and tourism, to finance, communications and human resource.

Under the pact, a number of infrastructural projects are being constructed and special economic zones established, not to mention the introduction of augmented power generation capacity and a vast network of railways and highways intended to connect Gwadar and Karachi with the Xinjiang region in China.

September 2015
Completed projects include a bypass consisting of two large bridges and five kilometres worth of tunnels.

September 2017
More than $14 billion worth of CPEC projects were under construction.

By 2030
CPEC is fully completed, bringing peace and prosperity to two nations while promoting spectacular economic growth within Central Asia and South Asia.

Our main priority is to create an environment where people are resilience against, potential harm from external forces as well as from internal sources at Kings Park Gwadar we have completed our boundary wall and have security guards in place to guard your property. Your transaction with us are kept with extreme secrecy and containment so that we can provide the emotional security necessary for you be secure in your future investments. We also have a proper gate way made to the society & the project is supported and secured by the Pakistan Army and the Pakistani Government and is GDA Approved.

Kings Park Gwadar is located at the heart of Gwadar at "Zero Point". 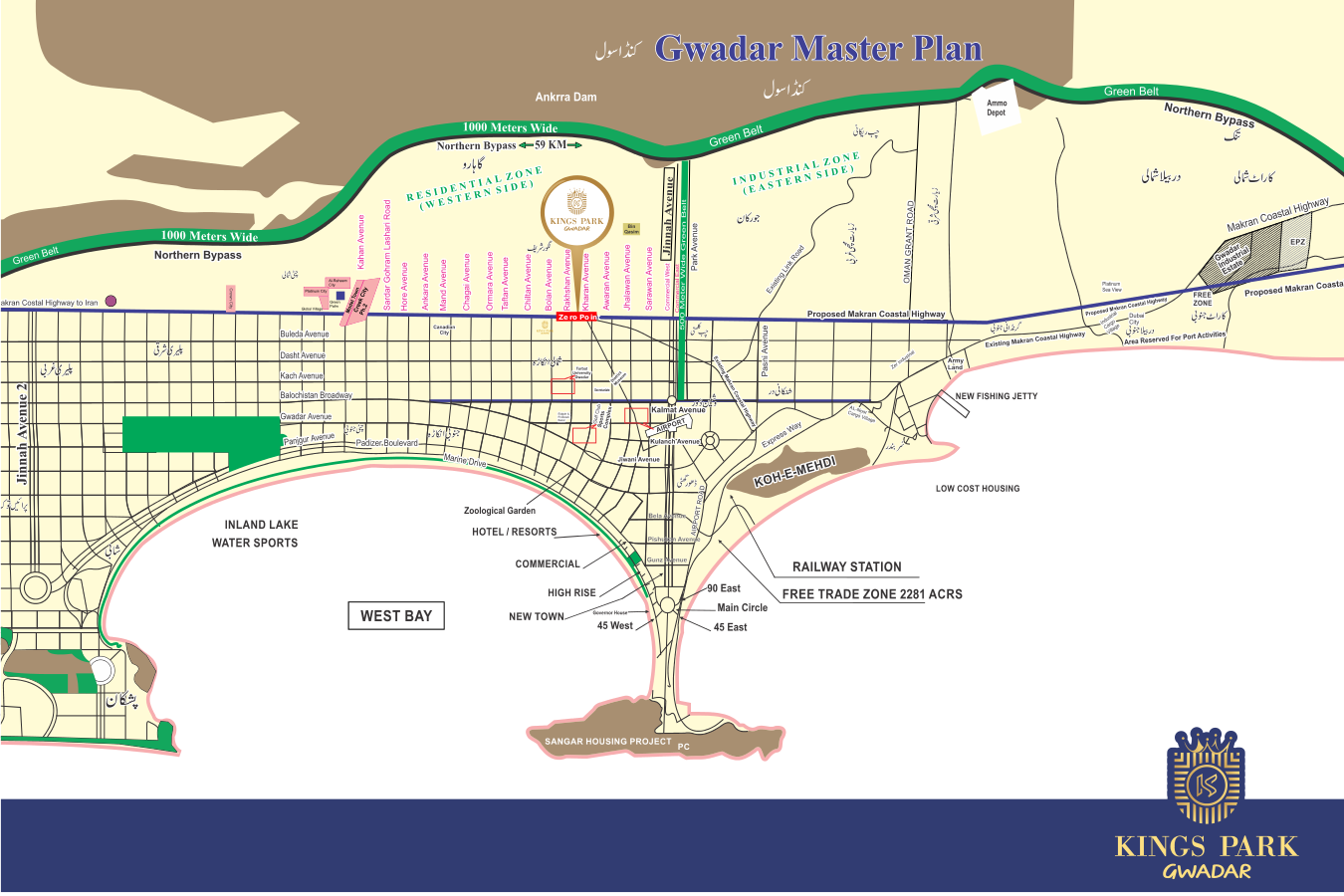 Gwadar is a land of opportunities and the upcoming social hub of many businesses.

Gwadar is a land of opportunities and the upcoming social hub of many businesses and potentially upholds the responsibility to cater the needs of millions of individuals. For this there are many facilities such as Airports, University, Civil Secretariat, Mosques, Marine Drive which will be commercial and engage many people with restaurants and hotels. Kings Park Gwadar is located in the heart of Gwadar at Zero Point and all these facilities are near to it as compared to any other society in Gwadar we are proud to say that we have been advancing towards a steady increment in our development and will be done soon.

Kings Park Gwadar gives you 100% ownership of your land.

Kings Park Gwadar gives you 100% ownership of your land. At the initial stage of giving 30% of the total value of the plot you receive an acknowledgment letter by Kings Park Gwadar stating the exact location and plot number. A letter is sent from the Gwadar District Authority when 60% of the total payment of the plot is made. This letters makes sure that the plot is under the name of the person who applied for the plot and is an official document used by the GDA.

Kings Park Gwadar is approved by GDA under category "A NOC"

Kings Park Gwadar is approved by GDA under category "A NOC"

Kings Park Gwadar wants to provide the best services and for that it works on the development from its raw purchase of materials to the finisihing stages so that the final development of Gwadar Commercial or Gwadar Residential Plots turn out to be in the best quality.